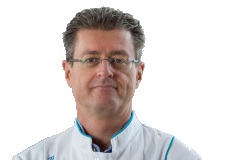 Martin Gotthardt is professor of Experimental Nuclear Medicine, Group Leader and Clinical Head of Nuclear Medicine at Radboud University Nijmegen. He studied Medicine in Marburg and wrote his thesis on the metabolism of glucagon-like peptide 1 (GLP-1).

He continued to work with GLP-1 analogs as tracer molecules for in vivo imaging of beta cells and achieved his German “Habilitation” in 2004. After that, professor Gotthardt started to work in the department of Nuclear Medicine at the Radboud University Nijmegen and continued to work with radiolabeled tracers for in vivo imaging of beta cells, with funding received from NIH and JDRF. He has coordinated the FP7 project “BetaImage” from 2008-2013 and is currently coordinating the Marie Curie training network “BetaTrain” (2012-2015) and the FP7 project “BetaCure” (2014-2018).

Under his supervision, exendin derivatives have been introduced in clinical research as first beta cell specific imaging probes. In 2007, he became extraordinary professor at the Philipps-University of Marburg, and since 2011 he holds a full chair for Experimental Nuclear Medicine at the Radboud University Nijmegen. He is co-founder and co-chair of the EASD study group “DiabImage” and is chair of the EARL task force EU Grants as well as chair of e-Learning section of the ESNM.